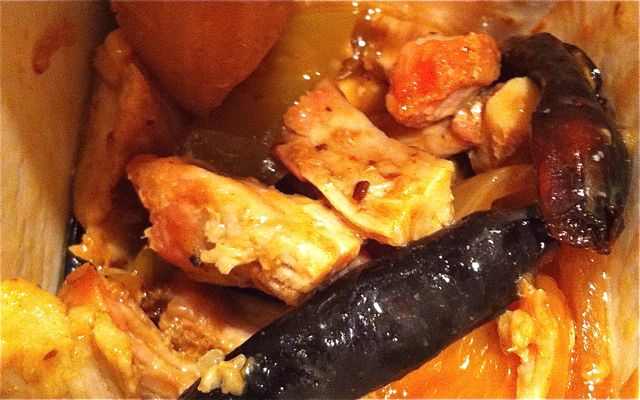 Since we discovered that the firecracker chicken breast was free at Panda Express for Chinese New Year on Jan. 31, we decided to get some that day. The chicken was in a black bean sauce which was just a little spicy from the chilies, but unfortunately, it tasted a little bland. It just tasted like chicken sitting in some sauce with onion, chilies, and bell peppers. The chicken was also pretty dry... I ended up drinking a lot of water due to the dryness of the chicken rather than the heat from the chilies. The best part of the chicken dish was the bell peppers. I probably wouldn't get these again, so it was a good thing we got it for free! 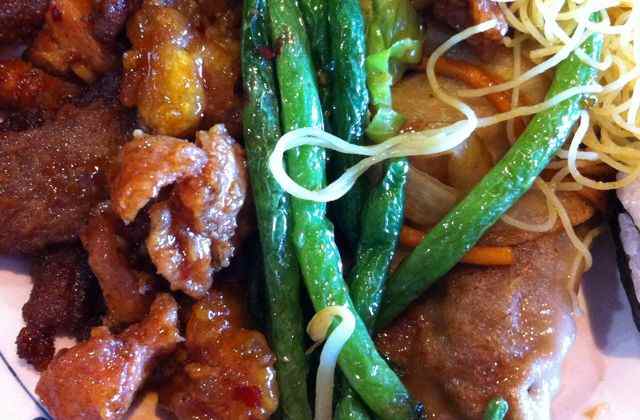 We tried the Asian buffet at Panda Super Buffet in Tucson, AZ.

At first glance, the food looked very greasy, and there were mussels and salmon with orange cheese slabs melted over them (which I did not try due to how disgusting they looked). Some of the chicken that I had was cold, while other pieces of the same chicken were warm. The mongolian beef was dry and the texture of the sushi rice was mush. The string beans I had were limp, and many still had their stems. The spring roll I had was very mushy on the inside. The potsticker I had was also very mushy, and it fell apart as soon as I put my fork in it. The only dishes that seemed to be OK were the lo mein and mei fun noodles.

Overall, this buffet was not very good at all.

Update: Not surprisingly, this restaurant is now closed... 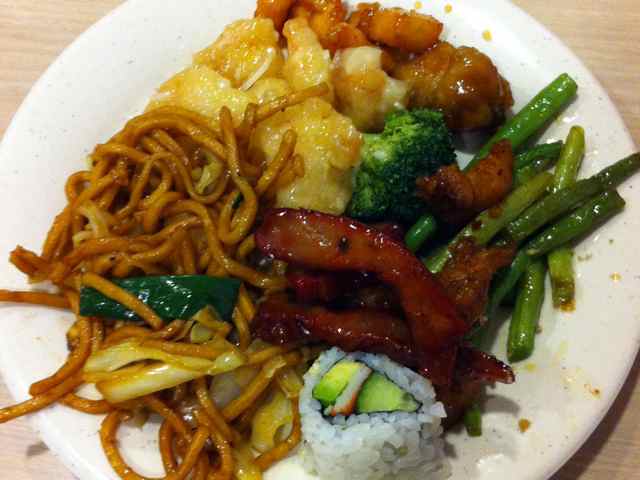 U-like Asian Buffet on Wilmot Road (Tucson AZ) is now open near the Park Place Mall. I've been driving past its "Coming Soon" sign for several weeks now, and I decided to try it now that it is open.

Some of the foods were similar to the food at New China Super Buffet, but they did have some different dishes. A lot of the foods were still on the oily and sweet side, as with most Asian buffets, but everything was still pretty good.

I really enjoyed the "spicy chicken" and the thick noodles they had. They also had batter-fried coconut shrimp, which were deliciously sweet and kind of crispy on the outside. It tasted similar to Panda Express's honey walnut shrimp without the walnuts. I was very happy to see they had mussels that weren't covered in cheese (unlike at New China Super Buffet).

There was also a Hibachi grill and sushi bar. The sushi seemed pretty well refrigerated, as it was sitting on a bed of ice. There was a big boat that had the desserts and the Hibachi fixings on top. Next to the boat, there was an ice cream chest freezer, where you could scoop out your own ice cream. There were 4 different types, and I tried the vanilla & chocolate. The vanilla was OK and was a little sweeter than other vanillas I have had, while the chocolate ice cream had the taste of a fudge bar in ice cream form.

Overall, the food I tasted was pretty good, and it was a step up compared to New China Super Buffet.

Update (July 2015): Unfortunately, it seems U-Like Buffet's food is going downhill. The last time I went there the food wasn't as great. The sauce on their chicken with broccoli was a gross, thick, white sauce that didn't add any flavor. Their spicy chicken was all hard (right after they added a fresh batch), making them practically inedible. After adding a fresh batch of green beans, some of their green beans were very stringy and woody. We may go there again in a few months and see if they are continuing to go downhill or if this was a one-time fluke.