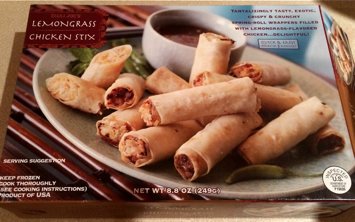 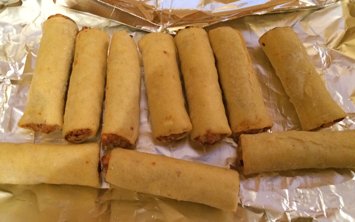 I've seen the frozen Thai Lemongrass Chicken Stix at Trader Joe's for a while, but I've never had it, so I finally decided to give a box a try. I cooked the whole box of 10 in a toaster oven following the oven instructions. I baked them on top of foil instead of a baking sheet.

The chicken stick wrappers were crunchy like spring rolls, and the texture on the filling inside was good; it wasn't mushy. I liked the slightly sweet lemongrass flavor of the "lemongrass-flavored" chicken. Unfortunately, that wasn't the strongest taste. The taste of the chicken was a little lemony and VERY peppery. The first "chicken stick" I had was OK, but as I continued eating, the pepper taste became way too overwhelming, and I couldn't eat any more.