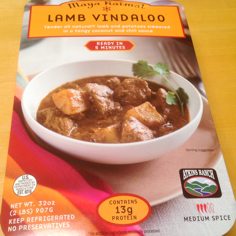 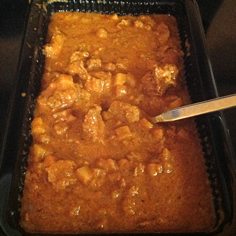 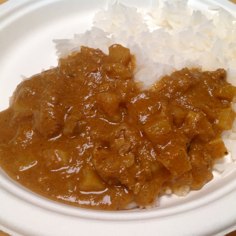 We bought some of Maya Kaimal's Lamb Vindaloo from Costco since we enjoyed the coconut chicken curry Costco had last year. The lamb vindaloo was very easy to prepare following the microwave instructions. We ate it with a side of rice.

The lamb vindaloo had sort of a slightly spicy and savory coconut curry taste with a little bit of tanginess. The label on the box showed the spiciness-level being at medium, which seemed about right. You could definitely taste the spice, but it wasn't super spicy. The sauce wasn't watery or too thick. The lamb was pretty good and went well with the sauce. Some pieces were a little dry, but they weren't overly dry or anything. The lamb vindaloo also had potatoes, which were a little on the crunchy / al dente side. The potatoes cubes were pretty small (each was about the size of a pea). I would have preferred bigger potato chunks, like the ones pictured on the box, but they still went well with the lamb.

Overall, it was very tasty and made for a good meal for me and my boyfriend. We also had leftovers the following day, and it tasted even better than the day before.

Update (Nov. 2016): We bought some of this lamb vindaloo again, and this time it had larger potato chunks! Unfortunately, it also had more "fatty" lamb pieces, so it wasn't really a good trade-off. However, the taste was still good.